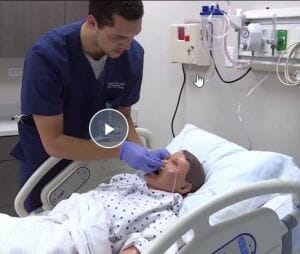 There's a big need for nurses in Oklahoma.

The state is facing a nursing shortage that has gotten worse during the pandemic. The Bureau of Labor Statistics predicts that the United States needs 190,000 new nurses a year to meet the demand.

One university has a program to get qualified nurses to work faster.

Erik Wierenga is a nursing student at Marian University in Oklahoma City.

"When the pandemic happened, I really wanted to get into nursing school," he said. "Everything that was going on in the hospitals was being like, you know, this huge crisis was, was kind of a motivator for me."

Now, four months into the 16-month online program, Wierenga is already putting his skills to work.

"Last night, actually, in the hospital we were actually allowed to do those skills and so we got to, we got assigned the nurse," he said.

Wierenga is on his way to being part of a workforce that is in high demand more than ever.

She said Oklahoma is well below the national average for the number of nurses per 100,000 people.

She said in 2019 there were thousands of qualified applicants who didn't get accepted into nursing schools.

With accelerated programs expanding across the country, she hopes others will answer nursing's call.

"Not everybody can be a nurse, so that has to be something that's in your heart," she said.

"You have to be really committed to it," Wierenga said.

Marian University's Oklahoma City Campus is located at 3817 Northwest Expressway, Suite 450.  It's easy to get started in their 16-month program with three start dates a year, in January, May and August.